LIke any other object in the Windows world, services are objects, you can therefore give users rights on them. Let’s see for example how to allow start stop service rights to non-administrators.

In order to change the permissions to a service, you’ll need an account who has rights to change permissions on that service obviously. This means being local administrator of the box or already having that “Full control” right on the service.
You’ll also need to retrieve the SID of the users or groups you want grant access.
There are a few ways to achieve this. You could use a runas command to launch a “whoami /all” command for example. For a domain user, you can use a simple “Get-ADUser” / “Get-ADGroup” cmdlet

You also need the short name of the service. In the full example below, I’ll take “Windows Update” service. To retrieve its short name, I can use either

Once we get that short name also called «keyname » (Because it is the name of the key in the registry under which the parameters for the service are stored), we can dump its current security settings. Since we can easily mess up, we’ll save the current settings for future retrieval. In order to accomplish this, you do:

And you’ll get something as ugly as:

This is a security descriptor in SDDL format which is stored in the Security value of the Security registry key under the keyname in HKLM\CurrentControlSet\Services. 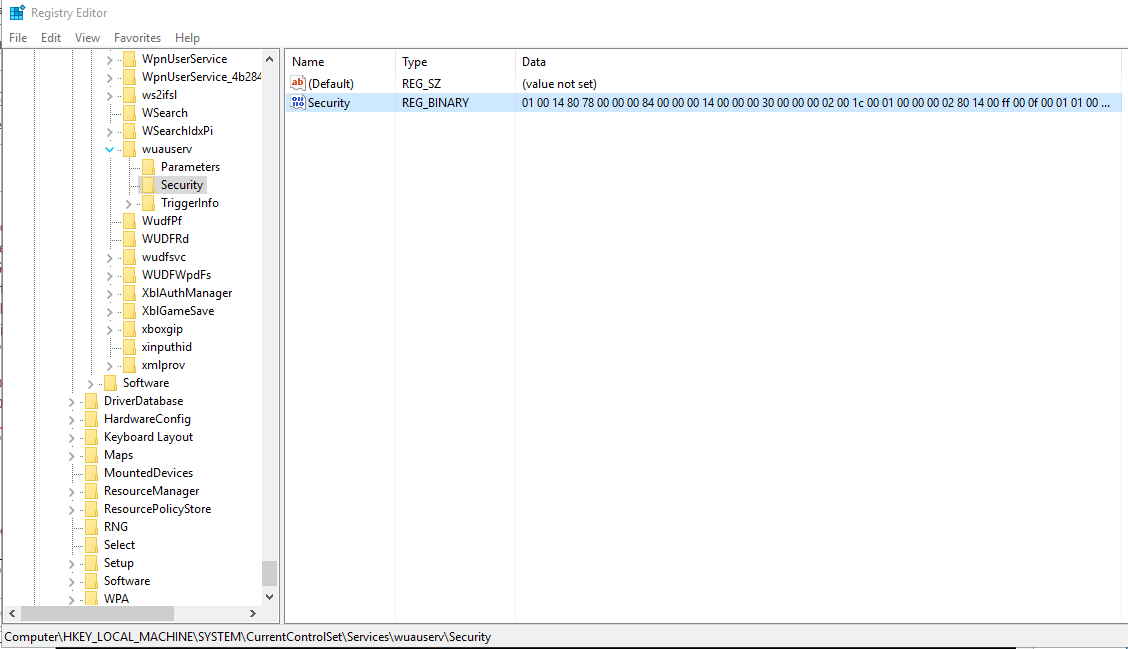 The <Something> after the D: is what we are interested in, these are the security permissions.
The <SomethingElse> after the S: are the audit permissions, we are not interested in here. Notice how letters are counter intuitive
After the D:, you’ve got a set of blocks between parenthesis. Each represent a security right and must be read as follows:
The first letter is A for Allow or D for Deny (you remember we can deny people, don’t you?)
The second part after the 2 semicolons is the permission set and the letters depend on the object you’re working on. You must read them by pair.
For a service, you’ve got:

The last part, just before the end parenthesis is the user or group the permission applies to. As we have the default set of permissions here, we only have “well-known“ groups which may be abbreviated by 2 letters (Otherwise you would have for each domain to know the full SID even the RID wouldn’t change)
Often you’ll encounter

So we can now build the security descriptor to add to grant the start and stop rights we want:

Since we don’t want to remove permissions for other users we must reassemble the full string:

SDDL to grant start stop service right to any user

Do not forget we must put this in the “D:” part of the SDDL!
Once we’ve built that string, we can use

The return should be

You may get errors such as

In that case, check you have a valid SID and there is no space in all the string.

You can also verify that the registry value “Security” under HKLM\CurrentControlSet\Services\wuauserv\Security had its contents changed.
Once you’ve made the change on a server, you can replicate the setting to other machines using your preferred method (script, GPP, …)