When you’re establishing a relying party trust with a provider filtering group membership you send through your AD FS Farm is often a prerequisite, either for performance issues -so that the token is not too big- or for security reasons as you do not want your provider to know your organisation, in particular when Windows groups are used as a RBAC model.

Unfortunately, by default the wizard only proposes to

When you have design your application so every role is a Windows group membership and your applications has multiple roles, the task can be tedious in a scenario where “Your App” may have dozen of roles and each user may have read, write, or whatever additional permission.

Fortunately, the wizard is just a prebuilt set of rules around the ADFS language to create and issue tokens. We can therefore build our own rules, and this will serve us as a quick introduction to the ADFS language.

To have some boiler plate examples of the ADFS language, you can always select the ‘View language’ button at the bottom left of pre-built rule: 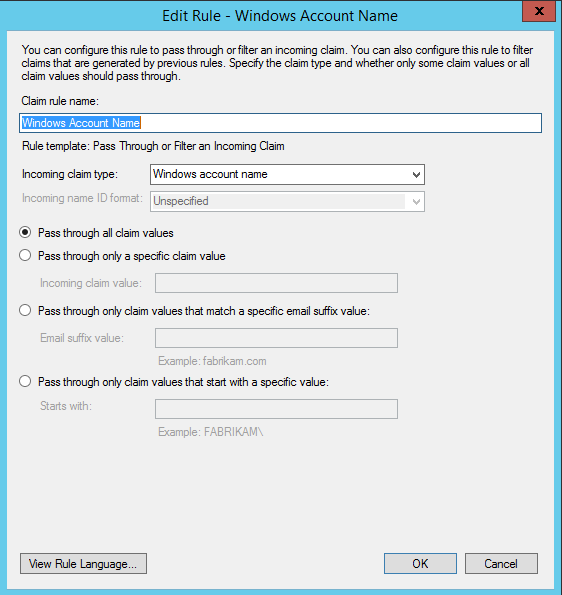 In this case, we can such that such a rule is equivalent to a custom rule whose contents would be:

In this example the variable is named “c* and if it matches the type windowsaccountname, it is simply issued. On a general note, an ADFS rule is “Condition => Action”. If condition is empty, the action is always done.

The action can be:

In our example to filter the group membership, we will:

The first rule is then written

5.1 Get Group Membership from LDAP Claims without domain name

Note the verb ‘add’ to add the data to our temporary claim store.

The second rule can be expressed as:

Please note that the rule order is important, since we cannot change the store once the claim is issued

Needless to say that those 2 rules are managing the group membership part of the claims you’re going to send to your relying party. In most cases you may want to send other claims. A standard list could be: