Skip to content
Home » Products » DHCP Server » DHCP Unauthorize: There is no such object on the server

In this blog post, let’s see what you should do if you get during DHCP Unauthorize: There is no such object on the server error message,

As you probably know, a DHCP Server must be authorized in an Active Directory to start delivering addresses. This is to avoid rogue servers everybody could set up. The reverse operation is called “unauthorize” and you’re supposed to do it before removing the DHCP role on a server.

In most cases, this is never done as the role is not uninstalled but the server is switched off instead. In this case the old server still appears in the Active Directory as authorized.

The proper way to do it is to use the MMC, the  netsh commands or a powershell cmdlet.

In powershell the cmdlet is called, “Remove-DhcpServerInDC” and not unauthorize-something as the verb is not generic enough:

The same parameters should be used: DNS Name and IP Address.

How does it work

The authorization in the Active Directory just creates entries into the NetServices container of your configuration partition of your forest.

IF every goes well you’ve got an object representing for each server you have authorized.

If you are somewhere stuck into the middle of the process, you will get messages such as: 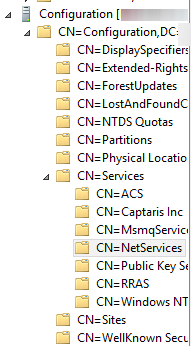 You may want to delete them using ADSIEdit.msc or any tool of your choice.

One thought on “DHCP Unauthorize: There is no such object on the server”