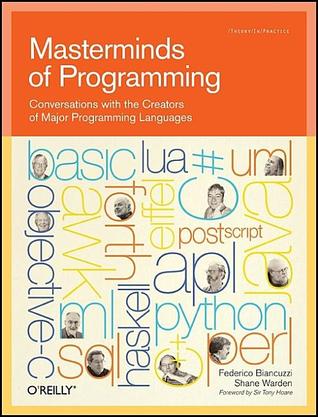 Although a bit ancient (2009), I had the opportunity to get an used copy of “Masterminds of Programming: Conversations with the Creators of Major Programming Languages” (ISBN 978-0596515171). This is a set of interviews with people who designed and/or implemented languages in a broad sense: programming language but also UML, etc.

Depending on the interviewee,  the interview is more technical or more general, more serious or enjoyable but you’ll learn always something.

On the amusing side, you’ll learn that atomicity has been introduced in SQL as a solution to the Halloween problem which popped up just before this long week-end when the authors realized that a script to calculate pay changes was raising the amount twice because rows appeared twice or more as soon as their position changed in the index.

On the human side, you’ll notice that the Objective-C creators find the C++ too bloated for its purpose whereas the two projects started with the same idea to circumvent C limitations, that the UML creator finds the current separation between architects, developers, testers project managers as counterproductive since you never know where your project is.

You’ll also see the difference between:

You can also pick up a few ideas  for your IT day-to-day practice, such as